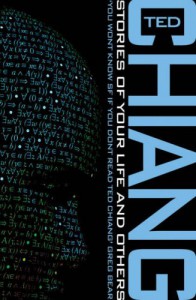 I finished the first two stories, Tower of Babylon and Understand.  As with any short story anthology you try to discern the theme throughout the book, so far maybe with the title's help, Stories of Your Life and Others, I can almost get a picture but I'm still intrigued.

The writer's use of different style to show a different time was apparent with the second story and hope it progresses. Our first story was based on the tower of Babylon and the lives of those who built it and the why of it all. Chiang used language more similar to that ancient time with his dialog, or at least how we would perceive them. The story was fine, I'd give it a 2  1/2 rating just because of the use of the descriptive narrative and the language syntax. I came away not knowing the why of the story, what was the author trying to teach me.

The second story Understand was a real change in the use of dialog and descriptive words to present a future time but not so far we didn't know when we were, after all the CIA was still around and doing what they do best or worst depending on how you look at it. But the concept was truly enlightening. The idea of a treatment to help regenerate brain neurons and thus make you smarter has been done before in many SYFY shows and stories, but this one was much different. .This was more about the changes within the person itself and how he perceives his world. I would definitely rate this one a 3 1/2. Chiang's use of dialog changed dramatically as our character got smarter. At times I had no clue what was being said or done within the character's brain. I'm sure that was the intent but it left me behind and made me realize how stupid I am and I didn't like that.

I am looking forward to the next two stories.